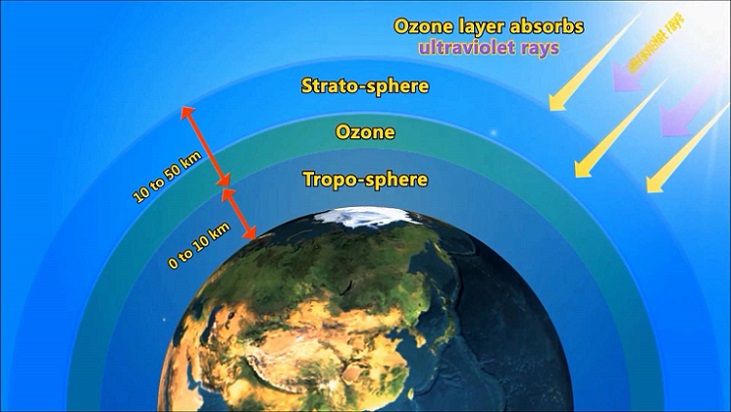 The decrease in ozone concentration in the middle layers of the atmosphere – mainly in the stratosphere – is extremely damaging to life on earth, and is largely caused by emissions of halogenated hydrocarbons produced by man, CFCs, HCFCs, halons, carbon tetrachloride and methyl bromide. For this reason, such substances are commonly referred to as Substances that Deplete the Ozone Layer (ODS).

The first warning voice came from a paper published in 1974 by scientists Sh. Rowland and M. Molina of the University of California, who showed that chlorofluorocarbons (CFCs) used in refrigeration, air conditioning and plastic foam manufacturing were responsible for the rapid destruction of ozone.

Substances such as CFCs, and others that are cited, that lower the ozone layer do not directly destroy ozone. First they undergo photolysis, forming hydrogen chloride (HCl) or chlorine nitrate (ClONO2), molecules that do not react with ozone directly, but slowly decompose, giving, among other things, a small number of chlorine atoms (Cl) and Of chlorine monoxide (ClO) molecules that catalyze the destruction of ozone.

The reactions involved in the processes of destruction are more than 100, but can be simplified in the following:

Cause of Ozone Layers Depletion 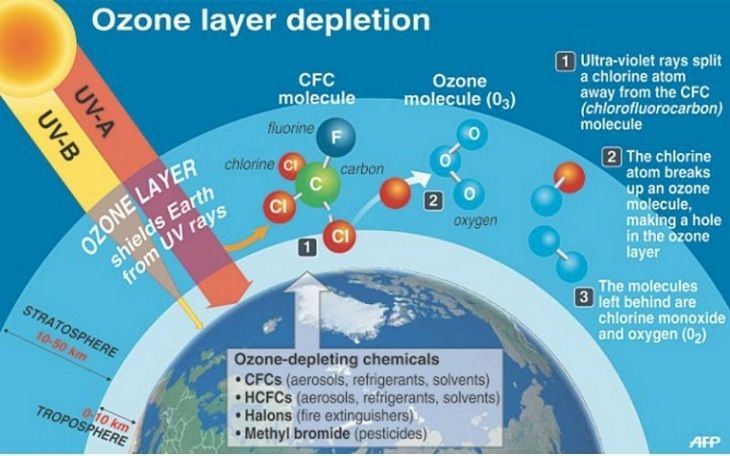 They are compounds formed by chlorine, fluorine and carbon. They are often used as refrigerants, solvents, and for the manufacture of spongy plastics. The most common are CFC-11, CFC-12, CFC-113, CFC-114, and CFC-115 which respectively have an ozone depletion potential of 1, 1, 0.8, 1, and 0.6.

Compounds formed by H, Cl, F and C. They are being used as substitutes for CFCs because many of their properties are similar and are less harmful to ozone by having a shorter half-life and releasing fewer Cl atoms. Decreases are between 0.01 and 0.1. But as they remain harmful to the ozone layer, they are considered only a temporary solution and their use has been banned in developed countries since the year 1930.

They are compounds formed by Br, F and C. Because of their ability to put out fires are used in fire extinguishers, although their manufacture and use is prohibited in many countries because of their ozone-depleting action. Their ability to harm the ozone layer is very high because they contain Br which is a much more effective atom destroying ozone than the Cl. Thus, halon 1301 and halon 1211 have ozone depletion potentials of 13 and 4 respectively.

Note: Technically all compounds containing C and F and / or Cl are halons, but in many legislation halon only means fire extinguishing substances with the characteristics indicated above.

It is a very effective pesticide that is used to fumigate soils and in many crops. Given its content in Br damages the ozone layer and has an ozone depletion potential of 0.6. In many countries dates have been set around 2000, from which it will be banned.

It is a compound that has been widely used as a raw material in many industries, for example, to manufacture CFCs and as a solvent. It was no longer used as a solvent when it was found to be carcinogenic. It is also used as catalysts in certain processes where chlorine ions need to be released. Its ozone depletion potential is 1.2.

1. Effects of the depletion of the ozone layer on human health

Today, it is estimated that skin cancer rates increased due to the decrease in stratospheric ozone (ozone layer). The most common type of skin cancer, called non-melanoma, is the cause of exposures to UV-B radiation for several years. There are already people who have received the dose of UV-B that can cause this type of cancer.

The United Nations Environment Program (UNEP) predicts that at an annual rate of 10 percent ozone loss over several decades, the increase in skin cancer will be around 250,000 per year. Even taking into account existing agreements for the phase-out of ozone-depleting substances (ODS), a realistic model would indicate that skin cancer would increase to 25 percent above the level of 1980 by the year 2050, along Of the 50 ° North latitude. The most lethal skin cancer, called melanoma, could also increase its frequency.

A person’s defenses against infection depends on the strength of his immune system. It is known that exposure to ultraviolet light reduces the effectiveness of the immune system, not only relating to infections to the skin but also to those that can be verified in other parts of the body.

Exposure to UV-B radiation may well enable the immune system to tolerate disease rather than combat it. This could mean the uselessness of vaccination programs in both industrialized and developing countries.

The loss of phytoplankton, the basis of the marine food chain, has been observed as the cause of the increase in ultraviolet radiation. Under the ozone hole in the Antarctic phytoplankton productivity decreased between 6 and 12 percent. That disturb the ecosystem.

UNEP indicates that a 16 percent decrease in ozone could result in a 5 percent loss of phytoplankton, which would mean a loss of 7 million tonnes of fish per year – around 7 percent of global fish production. 30 percent of human consumption of protein comes from the sea, this proportion increases even more in the developing countries.

For some species, an increase in UV-B radiation implies the formation of skin cancer. This has been studied in goats, cows, cats, dogs, sheep and laboratory animals and is probably pointing out that this is a common feature of several species. Infections in cattle can be aggravated by an increase in UV-B radiation. 3.2 Plants In many plants UV-B radiation can have the following adverse effects: alter its shape and damage plant growth; Reduce tree growth; Change flowering times; Make plants more vulnerable to disease and produce toxic substances. There could even be losses of biodiversity and species.

The Ozone layer is improving since the Montreal Protocol came into effect to stop and control the use of these chemicals. The Ozone layer depends on UV-C rays from the sun to replenish its self. The contaminants from chemicals prevent it from getting what it needs to protect the earth from harmful UV-B Rays

The Ozone layer is improving, but it will need many years before it the damage is repaired.