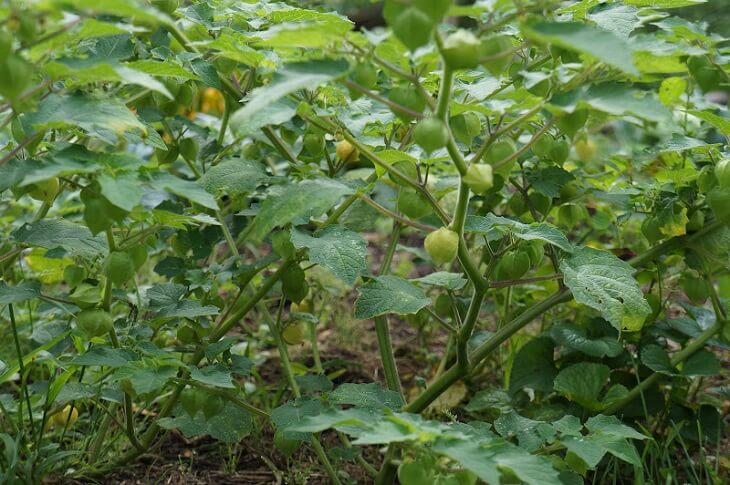 The term ground cherry suggests a low growing cherry tree, perhaps a shrub, where one must bend over to pick the cherries. In truth, the ground cherry is a genus of plants of the nightshade family (Solanaceae), and a close relative of the tomato. The name of the genus is Physalis, and there are quite a number of different species, some of whom are excellent for eating, some of whom are toxic, and some of whom are grown for ornamental purposes. Most, but not all of the Physalis species include the words ground cherry as a part of their common name. One of the better known species is the Mexican ground cherry, more commonly known to as the tomatillo.

Many Species – Other species names besides those called ground cherries are Bladder cherry, Japanese Lantern, Strawberry tomato, Native gooseberry, and the Husk tomato. The Husk tomato, Physalis pruinosa, is one of the better tasting species. The fruit, which resembles a gooseberry, though often slightly larger, grows inside a paper husk. The flavor of the fruit is said to taste a bit like a tomato, and a bit like a pineapple. Its flavor is also said to be similar to that of the Cape Gooseberry, though the ground cherry and the gooseberry are not related. The fruits can be used in salads and desserts, jams and jellies, and can also be eaten dried. As far as the overall appearance of the husk tomato is concerned, it is quite similar to the more familiar Japanese Lantern.

Planting – If one is planning on planting ground cherries for food, it is advisable to check first to see if a particular species’ fruit is edible or toxic, or in some cases, borderline. Few if any species are deadly poisonous, though some can be more harmful to livestock than to humans. Some caution is also needed when growing plant for eating, as the fruits are sometimes toxic when not fully ripe, or need to be cooked to remove toxicity. To play it safe, one can simply grow ground cherries for their attractive foliage and colorful husks. Most species have white flowers, though the blossoms are not particularly large or showy.

Seeds may need to be started indoors a good 4 to 6 weeks before the last frost in most areas, but the plants are easy to grow once in the ground. The plants prefer full sun; though will usually do well in partial shade. Easy to care for, the most difficult part of growing ground cherries may be trying to buy the seeds. The ground cherry is still not a terribly well-known plant, and seeds can sometimes be difficult to come by.