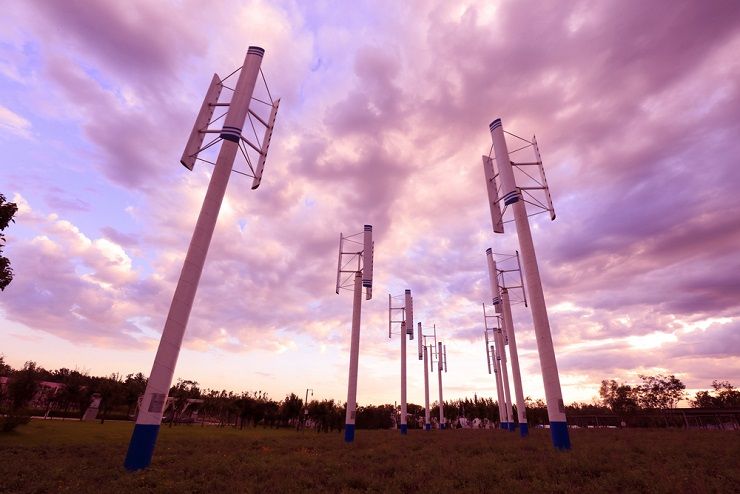 Vertical wind turbines are making an impression in the alternative energy scene these days for their unique design and new applications. Vertical Axis Wind Turbines (VAWT’s) are enjoying a revival of popularity, as they offer a number of advantages over more conventional Horizontal Axis Wind Generators (HAWT’s). Vertical wind turbines are not a new concept; since the Persians were using them thousands of years ago. VAWT’s are different from traditional HAWT’s because their main axis is perpendicular to the ground. Vertical wind turbines have a unique spinning rotor which is directly connected to a solid monopole or a vertical shaft. The rotor is connected through a gearbox to a generator which produces electricity.

VAWT’s Operate in Any Wind Direction

Vertical wind turbines, unlike other wind conversion devices, do not have to be positioned so that the rotors are facing in a moving wind current. The rotors can face in any direction, and still collect wind energy for conversion into mechanical energy. This is because vertical wind turbines are able to detect and catch the wind in any direction, no matter which way the wind is blowing.

Vertical turbines are ideal for use in cities and close to buildings, are not affected by wind turbulence. They create an extremely low shade profile, and have no disturbing rotor blade ‘disco effect’. Traditional horizontal wind turbines rely heavily upon wide open spaces and strong and constant wind speed of around 10 miles per hour in order to be effective. However, vertical wind turbines are the next generation of wind turbines; they are ideal for generating power in tight spaces, and have no long-reaching propellers.

Savonius wind turbines are a type of VAWT; and they are used for converting the power of the wind into torque on a rotating shaft. Created by Sigurd J. Savonius in 1922, this type of VAWT is used whenever cost or reliability is more important than efficiency. Savonius wind turbines are ideally suited to applications such as pumping water and grinding grain for which slow rotation and high torque are essential. These vertical wind turbines are recognized for their self starting capabilities and their ultra smooth torque leading to minimal issues with vibration. Savonius and other vertical-axis machines are not usually connected to electric power grids. The Savonius VAWT’s are very quiet, are mechanically simple, and require minimal maintenance. Because of their simplicity, Savonius windmills can be created with easily attainable parts, such as buckets and pipes. Overall, Savonius vertical wind turbines are considered one of the simplest windmill designs, are easy and inexpensive to build, and are efficient producers of free electricity.

Summary
Vertical Axis Wind Turbines have unparalleled advantages over Horizontal Axis Wind Turbines in terms of lower rotation speed, lower noise, higher efficiency, and they are not influenced by wind directions. VAWT’s operate well in small spaces, produce efficiently in high winds, and are found in commercial and residential settings. Current versions of vertical axis wind turbines that are available on today’s market include the Darrieus and the Savonius. Vertical wind turbines can be built or purchased