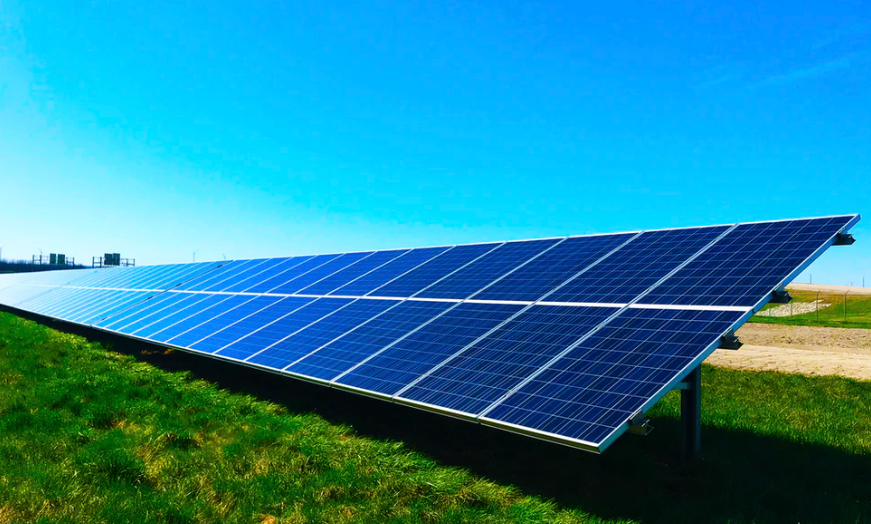 To use the energy from the sun, you need solar panels and you have a choice: Monocrystalline vs Polycrystalline. We’ll help you figure out which is best for your situation. But first:

Solar energy works by capturing the sun’s energy and converting it to useable electricity. Photons travel 93 million miles from the sun in about 8.5 minutes. Every hour, the sun produces enough photons to theoretically meet global energy needs for an entire year.

Currently, photovoltaic power (solar) accounts for only one half of one percent of the energy consumed in the United States. But solar tech is improving, and the cost is dropping rapidly, so our ability to harness the Sun’s abundant energy is on the rise.

What are Solar Panels?

Solar panels work because they use solar cells. Solar cells are made of silicon, like semiconductors. They are constructed with a positive layer and a negative layer which together create an electric field, just like in a battery.

When photons hit a solar cell, they knock electrons loose from their atoms. If conductors are attached to the positive and negative sides of a cell, it forms an electrical circuit. When electrons flow through such a circuit, they generate electricity.

Photovoltaic (PV) solar panels are made up of many solar cells, and multiple panels (modules) can be wired together to form a solar array. The more panels you can deploy, the more energy you can expect to generate.

With AC (alternating current) electricity, electrons are pushed and pulled, periodically reversing direction. Generators create AC electricity when a coil of wire spins next to a magnet. Many different energy sources can “turn the handle” of this generator, such as gas or diesel fuel, hydroelectricity, nuclear, coal, wind, or solar.

AC electricity was chosen for the U.S. electrical power grid, primarily because it is less expensive to transmit over long distances. However, solar panels create DC electricity. How do we get DC electricity into the AC grid? Use an inverter.

The Importance of a Solar Inverter

A solar inverter takes the DC electricity from the solar array, converting it to AC electricity. Inverters are like the brains of the system. Along with inverting DC to AC power, they also provide ground fault protection and system stats. Information like the voltage and current on AC and DC circuits, energy production, and maximum power point tracking.

Central inverters have dominated the solar industry since the beginning. The introduction of micro-inverters is one of the biggest technology shifts in the PV industry.

Micro-inverters optimize for each individual solar panel, not for an entire solar power system, as central inverters do. This enables every solar panel to perform at maximum potential.

When a central inverter is used, having a problem on one solar panel, (maybe it’s in the shade or has gotten dirty), can drag down the performance of the entire solar array.

Why They Are Important?

Photovoltaic and solar-thermal panels generate free electricity by converting sunlight into electricity or transferring the sun’s heat to heating and ventilation systems.

The use of solar panels to generate energy provides many benefits, which include reductions in the costs associated with generating electricity. Solar panels also provide pollution-free power sources and afford new levels of independence to energy consumers.

Reduces Air Pollution From Coal Power Plants and Other Sources

Mercury is among the pollutants that enter the air from coal power plant emissions. It can contaminate local ecological systems and harm plants, wildlife and human inhabitants.

Because solar power is emissions-free, it is safer for the environments and communities that neighbor solar panel arrays that are coal power plants.

Because solar panels convert light from the sun into heat and electricity, they require no other source of fuel. Coal, natural gas, oil, and nuclear power systems rely on nonrenewable resources to generate power.

Nuclear power is sometimes categorized as a clean or “green” energy source.

That’s because of the lack of air pollution associated with it, but it also generates harmful waste. Nuclear fission reactors are controversial because of the long-lasting nuclear waste they produce and the possibility of catastrophic events, such as the Chernobyl meltdown.

Preservation of Habitats Affected by Mining

Coal and uranium mining are often devastating to their local environments. Heavy equipment, waste products and large-scale disruption of local habitats render the land surrounding a mine barren and unusable after the mine is no longer in use.

Coal mining is also dangerous to the workers who operate the mines. The use of solar panels eliminates these dangers to both miners and the environment.

Reduces The Cost of Electricity

Because sunlight is available at no cost, solar panels do not require expensive mining and fuel processing. Once a solar panel is built, it operates for free.

In some applications, solar panels can be used to supplement existing power sources to reduce the total cost of energy. In power systems where all of the needed electricity is supplied by solar and other renewable energy sources, such as wind or hydroelectric, ongoing electricity is generated completely free of cost.

Nations that need to obtain oil and other fuel sources from other nations are beholden to their suppliers. Such countries may find it necessary to compromise their national safety or principles in order to maintain trade with their suppliers.

Almost ninety percent of the world’s photovoltaic panels (PV) today are based on some variation of silicon. In 2011, about ninety-five percent of all shipments by U.S. manufacturers to the residential sector were crystalline silicon solar panels.

The main difference is the purity of the silicon. The more perfectly aligned the silicon molecules are, the better the solar cell will be at converting solar energy (sunlight) into electricity (the photoelectric effect).

The efficiency of solar panels goes hand in hand with purity, but the processes used to enhance the purity of silicon are expensive.

Since these yields that highest power outputs, they also require the least amount of space compared to any other types.

Disadvantages of Monocrystalline vs Polycrystalline

Monocrystalline solar panels are the most expensive. From a financial standpoint, a solar panel that is made of polycrystalline silicon can be a better choice for some homeowners.

The Czochralski process is used to produce monocrystalline silicon. The process creates large cylindrical ingots. Four sides are cut out of the ingots to make silicon wafers, but this process results in a significant amount of the original material ending up as waste.

However, for most homeowners temperature is not a concern.

The process used to make polycrystalline silicon is simpler and cost less. The amount of waste silicon is less compared to monocrystalline.

Heat can affect the performance of solar panels and shorten their lifespans. However, this effect is minor, and most homeowners do not need to take it into account.

You generally need to cover a larger surface to output the same electrical power as you would with a solar panel made of monocrystalline silicon. However, this does not mean performance is better for every monocrystalline panel.

Monocrystalline solar panels do tend to be more aesthetically pleasing since they have a more uniform look compared to the speckled blue color of polycrystalline silicon.

A 2017 report from the International Energy Agency shows that solar has become the world’s fastest-growing source of energy, the first time that solar’s growth surpassed that of all other fuels.

It is still the fastest-growing source, and most likely will continue to be so.

In the coming years, we’ll all be enjoying the benefits of solar-generated electricity in one way or another.

You should prefer higher-efficiency solar panels if your PV system size is limited by the amount of space available on your roof, or if you live in an area with extreme heat.

Paying the extra for more efficient monocrystalline panels to you maximize your electricity production makes more sense in these scenarios.

Alternatively, if you have a lot of roof space or are installing ground-mounted solar, then lower-efficiency polycrystalline may be a more economic option.