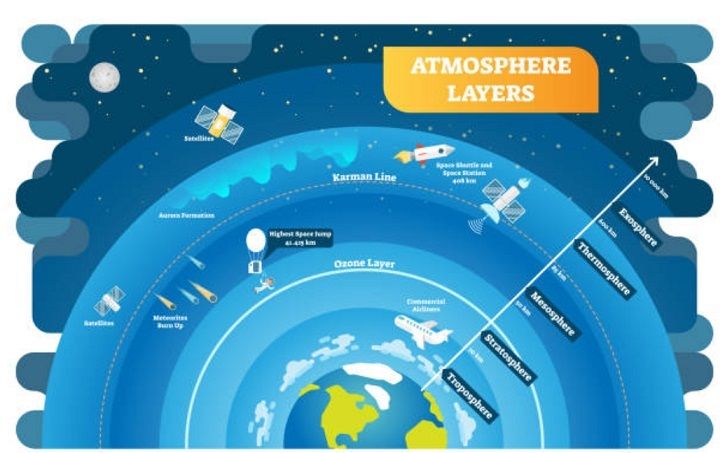 What is the atmosphere?

We call atmosphere the more or less homogeneous ball of gases concentrated around a planet or celestial star and held in place by the action of gravity. On some planets, composed mostly of gas, this layer can be particularly dense and deep.

The terrestrial atmosphere reaches about 10,000 km away from the planet’s surface, and hosts in different layers the gases necessary to preserve the stable planetary temperature and allow the development of life. The air currents present in it are closely related to the hydrosphere (the set of planetary water), and are affected reciprocally.

Our atmosphere can be divided into two large regions: homosphere (the lower 100 km) and heterósfera (from 80 km to the outer edge), according to the variety of gases that make up each, much more varied and homogeneous in the first, and stratified and differentiated in the second.

The origin and evolution of the atmosphere date from the very beginnings of the planet, in which a thick layer of primordial gases remained around the planet, constituted mainly by hydrogen and helium from the solar system. However, the gradual cooling of the Earth and the very later appearance of life were changing the atmosphere and varying its content to reach what we know today, through processes such as photosynthesis and chemosynthesis or respiration.

The Earth’s atmosphere is composed of the following layers:

The atmosphere plays a vital role in the protection of the planet and therefore also of life. Its density diverts or attenuates electromagnetic radiation from space, as well as eventual meteorites and objects that could impact its surface, most of which dissolve due to friction with the gases entering it.

On the other hand, in the stratosphere is the ozone layer (ozonosphere), an accumulation of this gas that prevents the direct access of solar radiation to the earth’s surface, thus keeping the planet’s temperature stable. At the same time, the mass of gases prevents the rapid dispersion of heat into space, in what is called the “greenhouse effect”.

Finally, the atmosphere contains the essential gases for life as we know it, and fulfills a vital role in the perpetuation of the water cycle of evaporation, condensation and water precipitation.