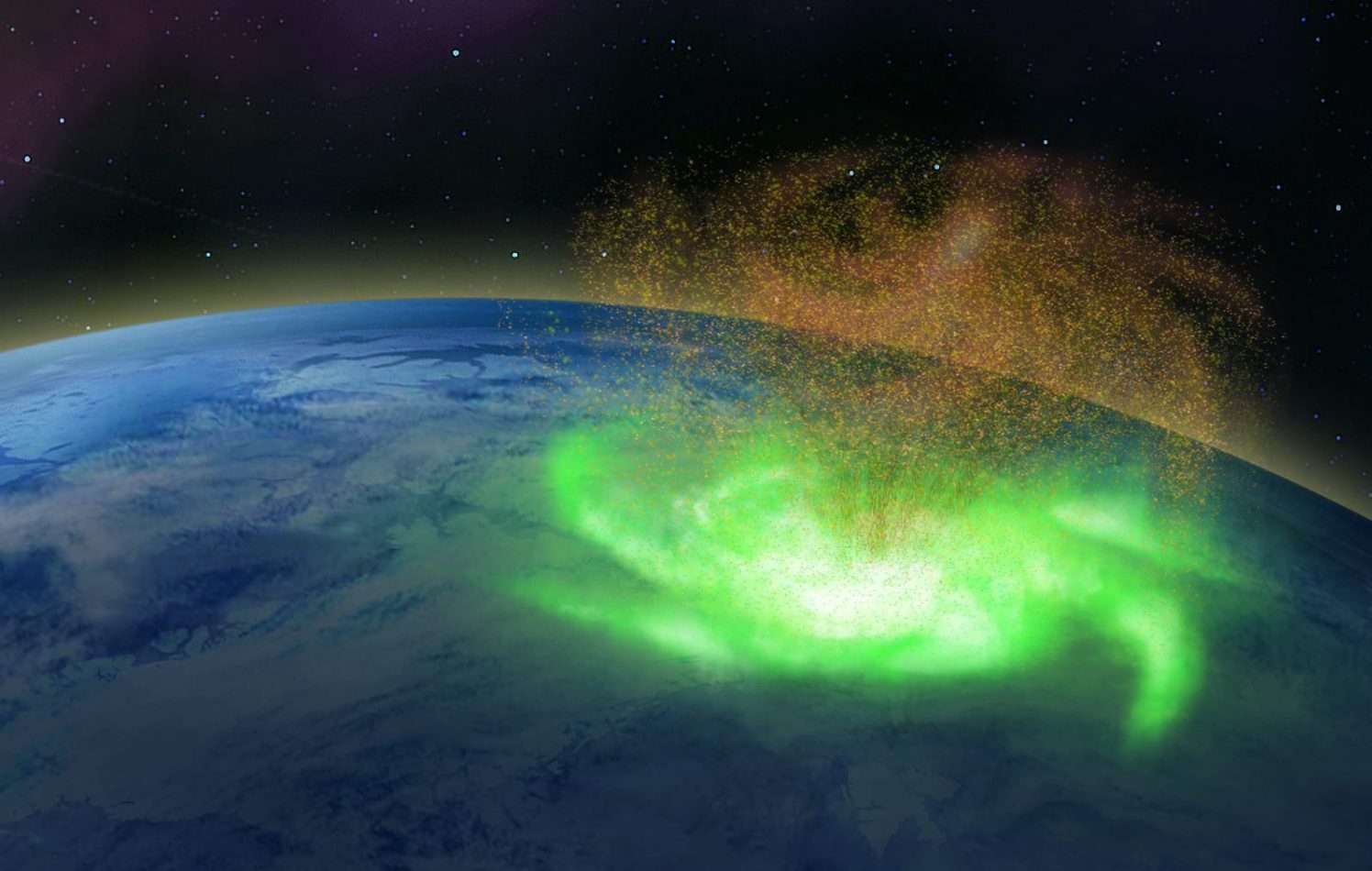 For years, researchers have wondered if plasma hurricanes in space, dubbed a space hurricane, were real. Now, scientists using a decade of data from the Defense Meteorological Satellite Program (DMSP) revealed space hurricanes are real.

In a new study, the researchers discovered a space hurricane 621 miles wide formed on August 20, 2014, above the North Pole.

Unlike a hurricane in the lower atmosphere, the space hurricane rained down charged electrons, not rainwater.

Another difference from usual hurricanes is that space hurricanes are driven by plasma from the solar winds. Earthly hurricanes form when air masses of different temperatures collide, driving powerful winds.

Plasma is energized gas found where the inner magnetosphere overlaps the ionosphere.

That’s the region around Earth dominated by the magnetic field, notes NASA. The massive cone-shaped magnetosphere shields Earth from solar and cosmic radiation. Without this layer, life may not be possible, In fact, Earth might end up more like Mars.

“Other planets in our solar system have magnetospheres, but Earth has the strongest one of all the rocky planets. Earth’s magnetosphere is a vast, comet-shaped bubble, which has played a crucial role in our planet’s habitability,” states NASA.

Beneath the magnetosphere, we find a sea of electrically charged particles called the ionosphere. It is a region from 30 to 50 miles above the planet.

See a great explanation of the magnetosphere from Visit Norway below:

Recommended: How Personal Choices Can Affect the Earth

Amazingly, this massive space hurricane formed during a period of low geomagnetic activity.

“The hurricane imparted large energy and momentum deposition into the ionosphere despite otherwise extremely quiet conditions,” states the study abstract.

Nevertheless, it spun up to 4,700 miles per hour, rotating counter-clockwise for about eight hours, leaving an “auroral signature.” Therefore, scientists think that space hurricanes may be common occurrences throughout the universe.

Qing-He Zhang, a space scientist at Shandong University, led the new research. He and a student poured over images from the DMSP satellites for two years, as reported by Vice.

Thousands of images featured the polar aurora lights, also called the Northern and Southern Lights. The aurora produces beautiful colors where the sky meets outer space, near where the space hurricane formed.

Auroras dance over the poles and can be seen with the naked idea at night. However, you would have to be very close to the magnetic pole to see this space hurricane, says Brown University Physics Professor Ian Dell’Antonio. (see video below)

After looking at auroras going back 15 years, Zhang said he believes he and his student found “tens of cases showing the space hurricane features.” However, the one they focused on was “the best,” example he said.

How Do Space Hurricanes Affect Satellites?

If space hurricanes are more common than we thought, how are they likely to affect their surroundings?

After all, the ionosphere is home to Earth-orbiting satellites. Plus, radio and GPS signals travel in this constantly changing layer 50 to 400 miles above Earth’s surface. Thus, a space hurricane could disrupt life on Earth, knocking out communications, electronics, and radar.

“As more and more satellites are launched, this could become more of an issue,” Dell’Antonio told WPRI.

Thus, the formation of space hurricanes may present a challenge as space technology advances. Hopefully, further studies may help with forecasting this newly discovered space weather.

See more from Amaze Lab below: